The Green Heart City in Italy, also known as Umbria, is one of the smallest wine regions in the country. Quaint medieval villages and lush green hills surround the region.  The fourth smallest wine region in Italy, the region produces almost a third of the wine that the Tuscany does and has been overshadowed by Marche, Latium, and Tuscany. With that being said, Ubrian wines are becoming much more respected and known around the world.

The history of Ubria’s wine making history started with the Benedictine monks they first started planting grape vines in the sandy and calcareous clay soil that the region is known for. The climate in the region is similar to Tuscany and enjoys dry and sunny summers, and cold and rainy winters with the exception being the area that surrounds Lake Trasimeno and Lake Bolsena, which is dominated by mild and Mediterranean microclimates.

A blend of four and sometimes five grapes, one of the best known Italian whites that is produced around Ubria is known as Trebbiano Toscana, Verdello, Grechetto, and Canaiolo Bianco, known also as Drupello, or Malvasia Toscana

Umbria is known around the globe as the land of the saints and includes San Benedetto, San Feliciano, San Fortunato, and San Francesco d’Assisi.

Velette Orvieto Amabile is made from 30% Trebbiano, 30% Grechetto, 20% Malvasia, 15% Verdello and 5% Drupeggio.A brilliant and pale straw color with golden reflections. The bouquet is complex and filled with ripe fruit and subtle spiciness. The palate is rich in flavor with a beguiling roundness and a subtle hint of spiciness. The finish is refreshingly fruity and not sweet or cloying.

Pairs with seafood, fresh and aged cheeses, spicy dishes such as Thai or Shezchuan. Soft and semi-matured cheeses. Very good as a dessert wine especially with fruit tarts and the traditional crunchy biscuits and cakes. 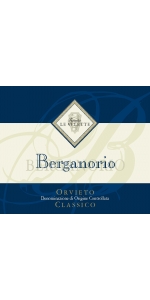 The result of centuries of devotion, selection and experience, this wine is the taste portrait of this area: cool as the air on the Orvieto rock, soft as the surrounding hills, direct, frank, open and sincere like the local people. Brilliant, pale straw-color with emerald reflections. The bouquet is ntense and filled with fresh fruit and floral nuances. In the palate, complex nuances of lemon, lime and apricots with a beguiling roundness and a fruity finish with a touch of bitter almond.

Origin of the name: A tribute to the three families of workers who were responsible for the farms on this hillside from the early 19th century and who have cultivated the grape varieties of Orvieto D.O.C. for generations.

"This is a noble expression of Cabernet Sauvignon"  in full regalia, with decadent aromas and a mouthfeel viscous and sleek. "This vintage of the Kingly Project Cabernet Sauvignon enters the scene"  -- Thomas Rivers Brown

The 2019 Cabernet Sauvignon Kingly Project is fabulous. A wine of vertical power and thrust, the 2019 soars out of the glass, showing magnificent intensity from start to finish. Black cherry, scorched earth, licorice, plum and chocolate give this substantial Cabernet tons of complexity. I would cellar the 2019 for at least a few years to allow the tannins to soften. -

Lismore Chardonnay made from 100 percent Chardonnay.

This very special Chardonnay was made in the style of a traditional Burgundian Chablis. It shows intense citrus and soft fruit layered with brioche, honey and walnut carried by a distinct minerality and crisp acidity with a lingering citrus finish.

Wine Made in the Soil

The vineyards are planted in decomposed shale over clay at 300 meters in the foothills of the Sonderend Mountain Range. A low mean February temperature lends to an extended ripening period that can put harvest 3-4 weeks later than traditional wine growing regions in South Africa. The intense citrus notes and the lingering finish are consistent trademarks of Lismore's specific terroir. The restrained minerality of the Chardonnay is a clear indication of the cool climate in which it is grown.

Wine of Origin "Greyton" has been designated by SAWIS recognizing the special terrior of this region.


Delightful with warm curries which lift the aromatics or a traditional pairing of smoked salmon highlighting the fresh acidity.

"The 2020 Chardonnay offers plenty of mango, pineapple and citrus fruit on the nose, all beautifully defined with a subtle minerally undertow. The well-balanced palate delivers orange pith and tangerine flavors, fine depth and a fresh pear and nectarine finish. Not the most complex Chardonnay that Samantha O'Keefe has ever produced, but still absolutely delicious. - Neal Martin"