The Alleme Estate
Alleme is produced at Bodega Talai Berri. Located in the town of Zarautz (in the Spanish side of the Basque Country).
Zarautz is a small fishing towns on the coast of the Bay of Biscay, in the province of Guipuzcoa, Basque Country, Spain.

Built in 1992, the winery lays on the sunniest slopes of Mount Talai Mendi, surrounded by 12 ha of vineyards.

Bixente Eizagirre Aginaga represents the fourth dynasty generation, and his daughters, Itziar and Onditz, the fifth generation making Txakoli out of their vineyards fruits.

- History: The Denominación de Origen Txacolí de Getaria was created in 1990 and covers around 227 hectares of vineyards, down from over 1,000 hectares at the turn of the 20th century. However, wine had traditionally been made in this manner for hundreds of years and was popular from the Middle Ages up to the end of the 19th Century, when the vines were devastated by the phylloxera virus and the effects of industrialization of the Basque Country. There are now 26 wineries (bodegas) registered with the DO.

- The Climate: The DO area is protected from the cold northerly winds by the coastal hills, and enjoys a relatively mild climate, with an average annual temperature of 13.5°C, and moderate sunlight hours. Hail is a serious risk for the grapes. The rainfall of 1,600 mm/yr is the highest of all the Spanish wine regions.

The vineyards are all located near the coast where they are protected from the spring frost and from the summer heat. They are planted on the southeast facing slopes for additional protection from the sea breezes and in order to receive more sunlight. The slopes are often very steep and sometimes not terraced. The vines are trained over wires and sometimes over earthen or stone pillars. They can be anywhere between 10 and 100 meters above sealevel. The subsoil is predominantly clay covered by a layer of sandy soil. 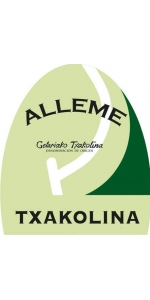 A very fruity, persistent and clean Txakoli. It reminds the white exotic fruits, such as lichy. It has a straw yellow color, without the slightest tone of rust and a faint natural gas pearl crown, due to the grape juice fermentation. In the mouth, it is greasy and unctuous, with a good balance of structure and acidity. In order to get such a Txakoli, we have combined the most traditional and the most innovative production methods to create it. Thanks to the batonnage (stirring of the lees), we have attained the characteristic unctuosity of this Txakoli.

After harvesting and pressing, the must is left to ferment in stainless steel tanks. Traditionally, and until recently, this was done in oak or chestnut barrels, called kupels, in Basque. Fermentation lasts 20–25 days and then the txacolí is left to lie on its lees. The CO2 prevents oxidation and dissolves the sediments and gives the wine its sparkling characteristic. The wines is not racked so it does not lose its sparkle and is clarified by natural sedimentation by gravity in the tank or barrel. Traditionally, the wine is tasted on the feast of San Antonio on 17 January, which is known as Txacolí Day (Txacoli Eguna, in Basque).

The 2018 Cabernet Sauvignon Red Mountain Estate is much more dense, tannic, backward wine compared to the Walla Walla Estate release. Its deep purple/plum color is followed by a masculine bouquet of crushed rocks, tobacco, iodine, and lead pencil. This carries to a full-bodied Red Mountain Cabernet with gorgeous overall balance, ripe yet building tannins, an undeniable sense of minerality, and a blockbuster finish. Possessing a liquid rock-like minerality (it seems to have been filtered through a bed of rocks), it's mostly educational at this young age and deserves 4-5 years of bottle age. It should keep for 2-3 decades in cold cellars.