The story of Anakota begins deep in the heart of Knights Valley in rural Sonoma County. Located in an ancient volcanic zone, this relatively untouched and unknown place offers incredibly unique and diverse soils with a climate perfectly suited to Bordeaux varietals.

Sourced from estate-owned vineyards, Anakota is a collection of single vineyard, single varietal, wines that personify the rustic elegance and spirit of rural Sonoma County.

Rising more than 4,000 feet above sea level, Mount St. Helena looks down on our two prized estate-owned vineyards Helena Dakota and Helena Montana which are quietly situated on the rugged flanks of the Mayacamas Mountain Range.

Knights Valley is a remote winegrowing region bridging Sonoma and Napa Counties. It’s a place where time dilates. It’s an untamed landscape defined by rugged mountains, steep hillsides, placid meadows and abundant wildlife. Even though this AVA has produced some of the world’s greatest wines, it is still a mystery to most. Set along the flanks and foothills of Mount St. Helena and the Mayacamas Mountains, this rustic sanctuary possesses the sparse volcanic soils and cusp maritime climate needed to produce elegant, profound and age-worthy Cabernet Sauvignons.

In 1843, Knights Valley – or Mallacomes Valley as it was called back then – was a part of the 17,742-acre land grant to Jose de los Santos Berryessa. After taking possession of the property, Berryessa built an adobe lodge for his guests and used the land as a private hunting preserve. After the Mexican-American war, Thomas B. Knight, a Vermont immigrant and participant in the Bear Flag Revolt, bought 9,000 acres of Mallacomes Valley and added a second story to the lodge.

In 1858 and 1861, Calvin Holmes and his wife purchased a sizable portion of Knights Valley and erected a large Victorian house that still stands today. In 1875, real estate barons F.E. Kellogg and W.A. Stuart began developing a small resort town at the intersection of Ida Clayton Road and Highway 128. The town, which included a general store, school, homes and a hotel, burned down in the fires of 1964 and 1965.

Up until Prohibition, wine grapes were the largest agricultural crop in Knights Valley. From 1919 until the 1970s, the population declined, and the region regressed into a more bucolic state. In the mid-1970s, Knights Valley was rediscovered, and vineyards were planted by savvy winemakers looking for new sources of high-quality fruit. Today there are more than 30 growers and 2,000 acres of vines strewn throughout Knights Valley.

Back in the late 1990s, we began exploring new locations to grow Grand Cru-level Cabernet Sauvignon. Our goal was to find a site that could deliver the opulence and concentration of Napa coupled with the acidity, precision and age-worthiness of Sonoma. We found the perfect site in the Knights Valley AVA, a little-known wine region that earned AVA status in 1983. We named our ranch Anakota and in 1997 began surveying the terrain, analyzing the soils and planting vines.

Over his half-century of winemaking, Pierre has developed and refined his proprietary “micro-cru” farming/winemaking principles. Based on experience, observation, experimentation and intuition, this system considers that every vineyard is an intricate patchwork of soils, microclimates, exposures and elevations. Rather than treat each site as a single entity, Pierre divides each property into small blocks and sub-blocks. These vineyards-within-vineyards – often as small as one acre – are designed to mirror the subtle changes in the soils, terrain and microclimates. These micro-crus are farmed individually to ensure uniformly ripe grapes that bear the message of the soil. Each micro-cru is harvested and vinified separately. Two wines vinified from identical clones and rootstocks, but originating in radically different micro-crus, will produce radically different wines. 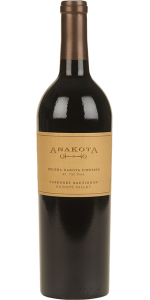 Helena Dakota is defined by its power, structure and sophistication. It is an intricate Cabernet Sauvignon that reflects both the terroir of the site and the influence of the surrounding Knights Valley AVA. It possesses layers of plums, anise, cassis, leather, bay leaf and cedar. Galvanized by a streak of minerals and bold tannins. Helena Dakota is a solidly-built wine that stands the test of time.

This sloping, 12-acre vineyard runs southwest to northeast at roughly 750 feet above sea level. It features soft, reddish brown, gravelly, silt loam soils speckled with rocks. Prevailing westerly winds blow over a large pond and continue uphill parallel to the rows of vines. These cooling breezes slow the ripening process creating wines that are both powerful and balanced with red fruit flavors, notable minerality and graceful tannins. Pierre says the Cabernet from Helena Dakota remind him of Pauillac or Saint-Estèphe.

Made from 100% Cabernet Sauvignon, the 2018 Cabernet Sauvignon Helena Dakota Vineyard was aged for 12 months in 100% new French oak. Deep garnet-purple in color, it has a profound yet slightly broody nose to begin, slowly unfurling to reveal wonderfully fragrant notes of wild blueberries, black cherries, dark chocolate and warm cassis, followed by nuances of garrigue, violets, tar and licorice plus a touch of wet stones. Medium to full-bodied, the palate has gorgeous velvety tannins and finely knit freshness supporting generous black and blue fruits, finishing very long and achingly fragrant. Wow. 1,000 cases were made.

The Baron Ermengaud cuvée is named after the lord Ermengaud de Fouzilhon who gave lands which were located on Laurens village in 12th century to the monks who built a monastic barn. The monks (Benedictine and then Cistercian) used to cultivate the vineyards there with really wise and modern at that time methods which allows Laurens people to enjoy from this teaching.

A beautiful rose petal robe. The nose is elegant and expressive with floral notes first (orange blossom, peaches), then spicy marks (ginger, white pepper). This is an invitation to spring time... On the palate, this rosé wine is delicate.

Drink as an aperitif with your friends or paired with subtly spiced dishes Indian, Thaï or South East Asia