The Cholila Ranch Winery is one of the first four wineries from the dessert region of  Neuquen, Patagonia. It is named after the ranch Butch Cassidy and the Sundance kid settled. The Cholila Ranch Winery made the area famous with their innovative wine styles. Neuquen is one of the most remote wine regions. The land consists of dust and stone roads in a dry backdrop. Surviving, let alone producing here is proof of man’s capacity to cooperate in unison with the environment.

[In February 20, 1901, Butch Cassidy & the Sundance Kid, boarded the British ship Herminius and steamed off to build a new life for themselves in the "United States of the Southern Hemisphere". They settled in a sheep ranch at Cholila Ranch, in the deepest Argentine Patagonia, under the alias of James Ryan and Harry A. place, where they were considered respectable citizens. - Extract of "Digging Up Butch & Sundance, by Anne Meadows]

Some wines by Cholila Ranch Winery:

Any Cholila Ranch wines we have in stock are listed below, if you don’t see the wine you are looking for please don’t hesitate to ask for it. 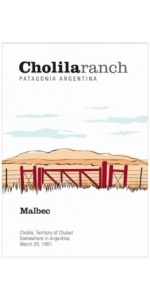 Named for the former Ranch owned by Butch Cassidy and the sundance Kid.

Cholila Ranch Malbec is made from 100% Malbec. The estate-grown grapes are manually harvested, carefully sorted, and destemmed. The wine undergoes traditional maceration for 21 days with selected yeasts. Cholila Ranch Malbec is aged both in American and French oak for 9 months, followed by a minimum of 6 months bottle aging prior to release.

Deep purple color. Aromas of ripe plum and mulberry with violet hints. Ripe black fruits and fig on the palate with touches of smoke and vanilla. A truly powerful yet balanced wine with a persistent finish.

Sourced from multiple vineyards accross California, the Navigator Cabernet Sauvignon is a complex yet easy drinking wine. Flavors of dark red fruit with notes of baking spice and coco envelop the palate and lead to a soft yet lengthy finish.