When Silvio Nardi purchased the Casale del Bosco estate in 1950, Montalcino was a little, rural village, the powerful Consorzio del Vino Brunello wasn’t yet an idea, and Nardi was the first "foreigner" to invest in Montalcino (he was from Umbria). Today, Montalcino is a renowned wine community with many international investors, and the 36 vineyard plots of Tenute Silvio Nardi extend east and west of the town on three separate estates. Since 1990, Silvio Nardi’s youngest daughter, Emilia Nardi, has focused on vineyard development and produced wines of depth that are profound expressions of the land they come from.

Silvio Nardi's youngest daughter, Emilia Nardi, has focused on vineyard development and produced wines of depth that are profound expressions of the land they come from.

A STRANGER IN MONTALCINO

Silvio Nardi’s father, Francesco Nardi, was a pioneer in the manufacture of agricultural tools in Umbria. In 1950 Silvio Nardi purchased the Casale del Bosco estate in Montalcino, Tuscany, and in 1958 produced his first bottles of Brunello di Montalcino. The family's deep ties to agriculture and the optimistic atmosphere of Montalcino in the late postwar years focused Nardi’s determination to produce a natural product of tradition and excellence. In 1962, he purchased the esteemed Manachiara estate, and in 1972, the Castello di Bibbiano estate.

BRUNELLO ON THE WORLD STAGE

In 1966, Brunello di Montalcino was among the first eight Italian wine producing zones to be designated a Denominazione di Origine Controllata (DOC). In 1967, Nardi was among the first members of the Consorzio del Vino Brunello, a voluntary association of producers who were determined to sustain and improve the quality of the wines of their zone as they gained prestige. In 1980, Brunello di Montalcino became the first Italian wine to receive Denominazione di Origine Controllata e Garantita (DOCG) status. The producers' awareness of the importance of astute viticultural practices and improved fermentation and maturation techniques led to a revolution in the 80s, with the development of more sophisticated viticultural and winemaking concepts. Brunello began to express its full potential.

Silvio Nardi focused on his vineyards, taking advantage of wine growing and winemaking technology and pursuing his belief in the importance of specific terroir. The result was that in the 1980s, Casale del Bosco and its Brunello were among Montalcino's best. A new generation’s leadership began in 1991 when Silvio’s daughter Emilia Nardi took over winery management and spearhead new projects of clonal research and phenological ripeness. Like her father, Emilia is focused on highlighting terroir in the wines. The exceptional 1995 vintage was the introduction for Manachiara, a "cru" created from a specially-vinified selection of the finest grapes from the single vineyard of that name. 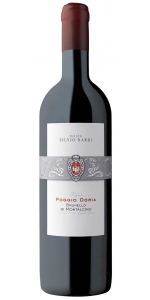 Tenute Silvio Nardi Poggio Doria is made from 100 percent Sangiovese.

Ruby red color with garnet highlights. Ample and highly complex flavors at the nose develop then to mineral notes of graphite, fruity tones of red berries and spicy aromas of clove and vanilla. Long and balanced at the palate, smooth and persistent notes bring to the elegant end characterized by present and velvety tannins

An impeccably balanced wine, and a perfect partner to a big Tuscan steak (air-dried for extra softness), the Tenute Silvio Nardi 2015 Brunello di Montalcino Vigneto Poggio Doria offers rich dark fruit intensity, good concentration and vivid aromas. It shows extra power and depth with plum, blackberry and a woody red fruit tone that recalls pomegranate or cassis. Even the appearance of this wine is a tone or two darker, albeit with that pretty Sangiovese shine and gloss that radiates from inside the glass. This Brunello delivers.

The purity of blue fruit, flowers and subtle wet earth are very impressive on the nose. Full body, firm and very silky tannins and a long and beautiful finish. Shows strength and longevity. Better after 2021.

Gaec de Brangers Menetou Salon Blanc 100% Sauvignon Blanc is crisp and refreshing with rich, ripe lime and grapefruit aromas. Elegant, beautifully rounded, harmonious and well-balanced, a mineral sytle and a smooth and long finish. It is ideal as an aperitif and a great match with shellfish, smoked and grilled salmon, goat cheese.DOMAINE DU GAEC DES BRANGERS is owned by the CHAVET family, which is one of the most reknown winemaking families of the Menetou-Salon Appellation. Philippe Chavet has been running the estate for 25 years and each year, his cuvees are awarded in the international competitions and by the international press.

Ideal as an aperitif, any cooked fish such as smoked and grilled salmon, and with goat cheese.