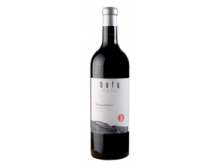 ID No: 442333
Rate This Item
+ Enlarge
No longer available.
Notify me of updates to Buty Columbia Rediviva Phinny Hill 2011
Try these Similar In Stock Wines 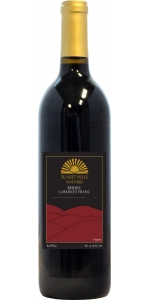 Ripe red cherry, black plum, and hazelnut bring this medium bodied wine to the table. Elegant tannins and subtle toasty notes round out the finish.

The base for the Cabernet Franc is from the Shenandoah Vineyard site, which is typically cooler than the other sites offering bright acidity and red fruit characteristics. Hand picked, chilled, destemmed to bins and tanks for fermentation. Fermentation 6-12 days. 15 years old vines. 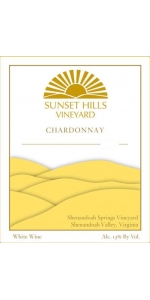 Notes of meyer lemon and white flower petals carry over to prange blossom and ripe melon. 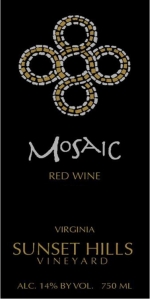 Dark tobacco and leather alongside cooked blueberry and plum. The structure is solid leading to an even finish. 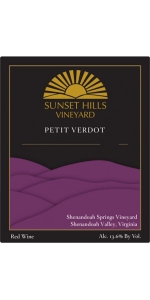 Deep red in color, this wine is silky on the palate, with ripe, jammy fruit and a powerfully long finish that is pleasant and slightly smokey. A rich, age-worthy wine. 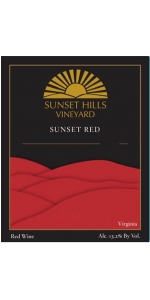 Notes of brambled blackberry, raspberry, plum, and forest floor. Light in body, leaning on acidity rather than tannins. Youthful and vibrant!

The lighter style that Sunset Red offers widens the scope of the wines here at Sunset Hills Vineyard. Delicate and youthful, the structure of the Sunset Red is carried by its acidity and bright fruit notes, rather than heavy oak or tannins. We want this wine to be enjoyed young—with the fruit notes still bright and vibrant. 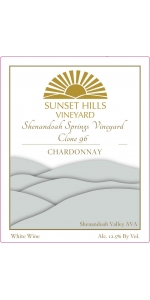 Sunset Hills Shenandoah Springs Chardonnay is made from 100 percent Chardonnay.

This is our first release of a clone-specific wine for Sunset Hills. The goal is to show you a specific terroir, one that year after year delivers excellent fruit quality. I chose clone 96 for its complexity both in ripening and barrel aging. During ripening, the fruit has notes of pineapple and pear with great acidity. I saw this wine as a chance to highlight not only the vineyard, but how detailed we can get in growing and making wine.

Alluring cherry and cream aromas hint at this wine’s lush, juicy mouthfeel, where lovely cabernet sauvignon layers of black cherry, cassis and spice are underscored by the density and richness of great Phinny Hill Vineyard syrah.

While our Columbia Rediviva is defined by the uniqueness of its blend, it is also a wine with a deep-rooted sense of place. Our 9-acre block of Phinny Hill Vineyard is located on the western side of Horse Heaven Hills at the top of a sun-drenched hill overlooking the famed Champoux Vineyard. This prized location has produced a wine with alluring cherry and cream aromas that hint at a lush, juicy mouthfeel, where lovely cabernet sauvignon layers of black cherry, cassis and spice are underscored by the density and richness of syrah.

The Buty Winery Estate
Pronounced "Beauty", Buty winery was founded in 2000 by owners Caleb Foster and Nina Buty, inspired by a decade of vintages from Washington and overseas. An artisan producer, Buty creates vineyard designated chardonnay, a crisp white blend and nuanced red blends—including Rediviva, Washington’s pioneering blend of syrah and cabernet sauvignon. The Rediviva of the Stones will be grown from the 2008 plantings at Rockgarden, their organic Estate vineyard in the cobblestones of Walla Walla.
Since the spring of 2001 they have worked with Californian consultant Zelma Long. Zelma’s multiple decades of worldwide winegrowing and winemaking offer a great breadth of wine and vine knowledge and a “whole business” perspective to Buty.
The philosophy of winegrowing and winemaking at Buty is one of balance, artisanship and enjoyment, as we aim to capture the essence of the grape in bottle.


The Buty Winery Vineyard
Caleb and Nina purchased 10 acres of apple orchard in Milton-Freewater in late 2006. In 2008, they organically prepared and planted Buty’s Estate, Rockgarden. The famous cobblestones section of the Walla Walla Valley appellation is located in the southeast part of the valley. In the 5% highest elevation of the cobblestones, this Grand Cru section has been the most prized farming section since the Walla Walla Valley was settled over one hundred years ago. Grand Cru is defined and set apart from its neighbors by location, history and consistently superior wines. We waited years to buy only here. Anywhere else further out in the cobblestones would have been a compromise. Developing the Estate with one wine in mind—the Rediviva of the Stones—we have densely planted clones of syrah, cabernet sauvignon, grenache, mourvèdre, marsanne and roussanne.

The Columbia Valley Appellation wines are sourced from six great estate grown vineyards. Caleb’s experience making wine from Champoux and Conner Lee Vineyards spans 16 vintages since 1992. All winegrowing stages are all maintained to Buty’s specific goals from pruning to shoot positioning, prevéraison cluster thinning, water and pest management, and the day and the time of harvest. They exclusively harvest by hand and hand berry sort on a shaker table before fermentation.

This Icon Malbec is suave and rich, offering loads of dark plum, currant and dried blackberry flavors supported by notes of soft spices. Molten chocolate notes emerge on the mid-palate, with Asian spice accents. The finish is long and ripe with a loamy character.