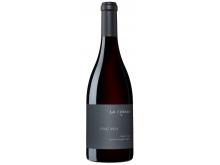 Pale to medium ruby-purple in color, the 2016 Pinot Noir Fog Veil has very pretty notes of cranberries, Bing cherries and pomegranate with touches of black pepper, lavender and cinnamon stick. Medium to full-bodied and offering a firm, plush frame and oodles of freshness, it gives tons of seductive yet elegantly styled fruit in the mouth, with a long mineral-laced finish. 1,250 cases produced.

When La Crema was founded in 1979 as La Crema Viñera, meaning the Best of the Vine, the name was intended as an unabashed boast: These vineyards produced the very best grapes in the region. Today, the name has been shortened to mean, simply, the best, and La Crema’s wines represent the best grapes from preeminent cool-climate regions in California and Oregon.

La Crema wines—inspired by Burgundian-style Chardonnay and Pinot Noir—are made in small lots that nurture distinct flavors and balance. The end result is elegant wines that are unswerving in quality over time.

La Crema began at a time during which few wineries in California were making Pinot Noir, and even fewer were doing so with a single-vineyard focus. A group of wine lovers ran the show back then using old-world techniques such as whole-cluster pressing and open-top fermentation. This was a great foundation for winemaking, but with stellar fruit from exceptional vineyard sites, there was always the opportunity for more.

That evolution took shape in the early 1990s when Jess Jackson and Barbara Banke imbued the winery with the artisan ethos it retains today. Their vision for the future was simple: That Pinot Noir should be as popular as Cabernet Sauvignon and Merlot, and La Crema could be the vehicle to do just that. They also loved that the winery was a pioneer of single-vineyard designate wines, and saw this as an important differentiator.

Jackson and Banke purchased La Crema in 1993 and produced the first vintage in 1994. Two years later a new winery was constructed in the fog-shrouded, redwood-lined Russian River Valley appellation. Jackson’s daughters, Laura Jackson Giron and Jenny Jackson Hartford, along with his sons-in-law, Rick Giron and Don Hartford, took on leadership roles at La Crema: managing the day-to-day operations and representing the winery out in the market. With a renewed vision, resources, and leadership, a new era had begun.

Initially, La Crema focused efforts on developing wines from the Sonoma Coast, deemed the next great appellation for Pinot Noir, using artisan, boutique-style production techniques, like gentle handling, precision sorting, and crushing grapes in small batches. The winery then set its sights on bringing in the best talent available at the time. Some of the winemakers during this period included Rod Berglund, Jeff Stewart, and Dan Goldfield. The list was an all-star lineup of winemaking greats and experts in Pinot Noir and Chardonnay.

Right after the new millennium, La Crema set out to nurture an estate vineyard program comprising the best cool-climate sites along the West Coast. The winery began working extensively with fruit from appellations such as Sonoma Coast, Green Valley, Anderson Valley, and Los Carneros, extending its reach into Monterey in 2008, and then to Oregon’s Willamette Valley in 2012. Though these growing regions are different, the vineyards themselves all fall within cool-climates with well-drained soils that restrict yields and produce distinctive, balanced wines. For La Crema, these technical similarities were keys to delivering the best of the best to its customers.

“Jess always felt that if you could grow your own grapes, you have a much better chance of really being successful in controlling the quality of your wines,” Don Hartford says, noting that farming the vineyards sustainably also helps grow the very best fruit.

Over the course of the last decade, the winery has continued to add wines from cool-climate vineyards in California and Oregon. Perhaps the most notable of these spots is the iconic Saralee’s Vineyard in Russian River Valley. As a result of their long-term grower contract, La Crema had been receiving coveted Pinot Noir and Chardonnay from the renowned vineyard for years and developed a close relationship with Richard and Saralee McClelland Kunde. When the Kundes approached them about buying the historic property in 2013, La Crema jumped at the opportunity. The winery launched a three-year rehabilitation of the circa-1900 barn on the property and reopened it as the La Crema Estate at Saralee’s Vineyard in 2016. Today, the convivial hospitality center that looks out on undulating hills of vines serves as the yin to the yang of the new and modern tasting room in downtown Healdsburg. 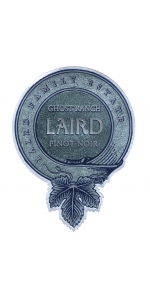 Vineyard workers have long reported seeing people between the rows and down by the creek, people who simply disappear when approached. Hence the name “Ghost Ranch”. This is our family’s seventh vintage of Pinot Noir.

Easily paired with a variety of cuisine including Pasta Puttanesca, cedar plank salmon or Paella. 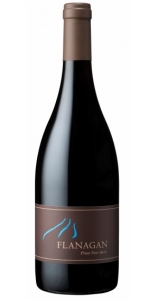 Our 2015 Flanagan Pinot Noir Sonoma Coast continued the string of “winemaker vintages” that started with the 2012 vintage. For the third year in a row, there were no damaging weather events and fruit condition was excellent. We continue to do relatively short fermentations with some whole cluster additions. The wine was aged in Francois Freres and Rousseau barrels for 12 months.

This wine is the first that includes fruit from our two new vineyard designate sites. Both Sunchase and Sonoma Stage are well regarded, cool climate Sonoma Coast vineyards and in 2014 both produced abundant, ripe, clean fruit. The resulting wine is reflective of the cooler climate sites and shows more restraint and more elegance than the 2013 Pinot Noir. The fruits are focused on black cherry and nearly ripe black plum (sweet, but crisp and not flabby). We used a gentler touch on the oak to allow the great vineyard sites and the beautiful vintage to shine through. 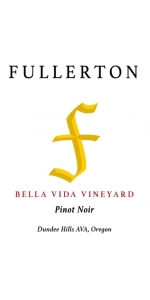 Bella Vida Vineyard is perched high in the heart of the Dundee Hills. This picturesque site provides elegant fruit from the storied Jory soils of the AVA. LIVE certified.

Aromas of cherry and raspberry flow into finely-tuned layers of cedar, cocoa, licorice, and baking spices. The palate pulses with energy as the silky tannins and gorgeous mid-palate captivate your senses. A radiant and profound experience.

A co-fermentation of Dijon clones 113, 667, and 777, this wine expresses the volcanic soils of the Dundee Hills elegantly, yet powerfully. Upon arrival, the grapes were immediately de-stemmed into an open-top two-ton fermenter. Following a seven day cold soak, the wine started fermenting slowly at a cool temperature. To manage extraction, we utilized one to two punch-downs and one pump-over per day, with two rack-and-returns at the beginning and middle of fermentation. As fermentation neared the end, the must was heated to achieve a peak temperature of 94° F resulting in optimum extraction, and then we immediately chilled the wine to extend the time on the skins, while switching to one pump-over per day to limit harsh, seed-tannin extraction. After a total of 19 days on the skins, we drained and pressed the wine, keeping the free-run and press fractions separate. This bottling contains only the free run fraction. Following two days of settling, the wine was racked to barrel and aged for 11 months in 25% new French oak and one month in tank prior to being bottled unfined and unfiltered.

Vineyard workers have long reported seeing people between the rows and down by the creek, people who simply disappear when approached. Hence the name “Ghost Ranch”. This is our family’s seventh vintage of Pinot Noir.

Easily paired with a variety of cuisine including Pasta Puttanesca, cedar plank salmon or Paella. 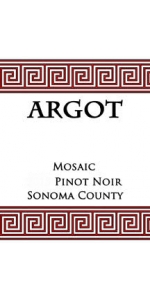 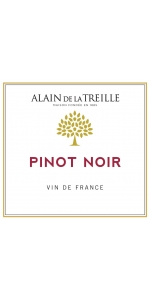 Colline Saint Jean Vacqueyras Vieilles Vignes is made from 80% Grenache and 20% Syrah.

This wine has a deep purple color, with an intense nose of ripe black fruits, plum, brandied cherries, and chocolate. In the mouth, the wine has rich flavors of black fruits. It is meaty, well-structured, and the tannins are round and elegant.

The juice is aged in concrete tanks for 18 months. The lack of oak helps to frame in the bright and defined dark berry flavors of the old vine grapes. I can not recall another red wine that displays this depth yet displays on the palate with such refreshing acidity.

Vieilles Vignes means old vines.For this specific wine, the age of the vines are comprised between 85 and 110 years old.

Traditional method. Manually picked. Harvest carefully sorted and 100% destemed. Maceration with skins during 20 days in cement vats. Large work of pump over to push the cap.