Vouvray is a well-known appellation of Loire Valley’s Touraine district in France. Wine production in the region is common but heavily depends on the weather conditions. Cooler climates in Vouvray lead to production of dry styles of wine while warmer climates tend to yield sweet styles of wine.

Chenin Blanc is nearly the only grape varietal that gets produced in Vouvray. There are some grape variations like the Arbois although it is considered to be a rare occurrence. Chenin Blanc grapes are planted across thousands of acres in Vouvray, making it the largest grape production in the region.

Chenin Blanc is known for its high acidity, especially when it is produced in dry style. Nevertheless, Vouvray wines are often characterized by honey, flower, nuts and fig that make delicious and complex wines. 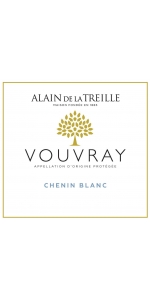 Alain de la Treille Vouvray is made from 100 percent Vouvray.

This Vouvray is stunning with its elegancy and freshness, which carry through the ripe fruity palate, marrying with hints of honey and apricots.

Average age of the vines is 15 years old.

An amazing Chenin Blanc,that will be Great with BBQ Pork Spareribs or a gourmet Apple pie ... 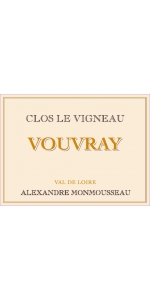 Clos Le Vigneau is a single vineyard from an area known as "les Gués d'Amant" or "Lover's Gap". Most of the vines were planted in 1929.

Off dry in style with honey, earth and apricot notes. Wines from the town of Vouvray have been known to age well for 40 years. This particular bottling should hold for at least 5-7 years.

The grapes bear small little dark red berries. The bunches are destemmed; they macerate in open vats during 4 weeks helping this subtle terroir to reveal itself. After devatting, the wines are aged in oak barrels during 18 months.

Bright cherry, currant and strawberry fruit flavors are backed by a dense matrix of dusty tannins in this compact red. Balanced, lingering with a hint of cumin on the finish. The saturated flavors are intense. Best from 2023 through 2038. 660 cases made, 200 cases imported. — Wine Spectator 93 Points

Of the great European wine families, the Rothschilds are perhaps the best known. And Baron Philippe de Rothschild is perhaps the best known of this great family. At the age of 20, Baron Philippe took on the management of Château Mouton Rothschild from his father Baron Henri. Philippe’s vision changed the world of wine: he invented Château bottling, commissioned great artists to illustrate his wine labels – and, in partnership with Robert Mondavi in 1979, created Opus One.In the 1980s, after her father’s death, Baroness Philippine de Rothschild left a stage career that included the Comédie Française and the Renault-Barrault Theatre Company, bringing her own exquisite style and creativity to the design, construction, and operation of Opus One.Among great New World wine pioneers, Robert Mondavi is an international icon. Bringing a passion for excellence to everything he did, Robert Mondavi led a renaissance in California fine wine for over six decades. Among other accomplishments, he introduced temperature-controlled fermentation, French oak barrel aging, and high-density viticulture to a fledgling American wine industry. But life was not only wine for Robert Mondavi: he broadened the American cultural palate by marrying fine wine to food, music, and the arts. One of few Americans to have received the French medal of the Legion of Honor, Robert Mondavi showed extraordinary vision as co-founder of Opus One.