The Weingut Albert Gessinger Estate
The Gessinger family migrated from Northern Italy in the late 1500’s and settled in the middle Mosel region of Zelting, where they worked as artistic masons on churches being constructed in the area. Quickly, they found themselves drawn to viticulture, the prime occupation of the region since Roman times and before. Weingut Albert Gessinger was founded in 1680. In 1820, Peter Gessinger, through marriage, acquired additional vineyards in Zeltingen and Gessinger became one of the first family owned companies in the middle Mosel dedicated exclusively to viticulture. In the 1890s, Weingut Gessinger joined the first organization dedicated to supporting quality wine production in Germany,  the Union of Winery Owners of Koblenz.  In 1899, Weingut Gessinger joined the Bernkastel Ring, an exclusive group to which they have belonged for over 100 years. The members of the Ring, the finest producers in Germany, sell select wines to connoisseurs from around the world.  Today, Alfred Gessinger owns the property and continues the family tradition of wine making going back centuries.

The Weingut Albert Gessinger Vineyard
The Estate consists of 8 acres or 3.2 hectares. The plantings are broken down as follows: 80% Riesling, 15% Spatburgunder (Pinot Noir), 5% Dornfelder (new red wine clone developed in 1956). All vineyards are located in the middle Mosel town of Zelting. Weingut Gessinger joined the Bernkastel Ring in 1899 and for years their wines only appeared at their September auction. Gessinger is quite small, less than 2,000 cases and all his whites are 100%  Riesling planted on Devon Slate (best soil type of the area). 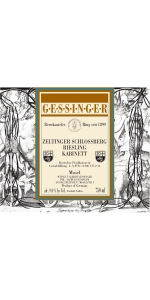 Weingut Gessinger joined the Bernkastel Ring in 1899 and for years their wines only appeared at their September auction. Gessinger is quite small, less than 2,000 cases and all his whites are 100% Riesling planted on Devon Slate (best soil type of the area). 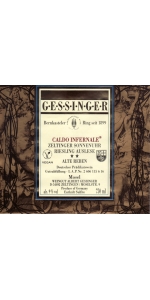 "I loved the 2015, and the 2017 Zeltinger Sonnenuhr Riesling Auslese Alte Reben Caldo Infernale is even better, offering a lush, rich, yet still vibrant style as well as gorgeous notes of honeyed nectarines, candied orange, peach, and exotic flowers. It packs plenty of sweetness and is medium to full-bodied, with solid acidity and a kiss of petrol and mineral nuances keeping it lively and fresh." 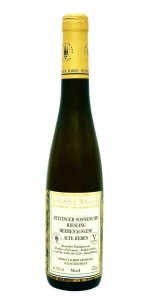 Gessinger Zeltinger Sonnenuhr Riesling Beerenauslese is made from 100 percent Riesling.

This deep yellow-colored wine offers a quite aromatic nose made of mirabelle, ripe apple, almond cream, date, ether oil, and earthy spices. It proves nicely complex and delicately oily on the otherwise focused and delicately racy palate, and leaves a subtly unctuous and still quite sweet feel of honeyed dried fruits, starfruit, kumquat, and almond cream in the precise and persistent finish. Some fresher elements of citrusy fruits and grapefruit already lighten up the aftertaste and hint at the greatness to come. This beautiful dessert wine is still really in its infancy but will develop into quite a beauty at maturity, once the candy floss driven sweetness will have receded into the background.

The Riesling Beerenauslese remains on the lees for several months to add a creamy texture to the mineral notes and to enhance the mouth-feel and drinkability.Zeltinger Sonnenuhr Riesling Beerenauslese Alte Reben was made from botrytized fruit hand-picked at a whopping 150° Oechsle from old ungrafted vines, spontaneously fermented and vegan. Fermentation with preferably wild yeasts gives this wine a unique and authentic taste, reflecting the extreme vineyard sites of the Mosel Valley. A cool temperature allows a slow fermentation which can continue for as long as the wine and the vintage requires.

Perfect match to sweet-and-sour dishes as well as spicy food.

Gravas Sauternes is a blend of 100% Sémillon.
The wine shows a lovely pale golden color with deep golden highlights. Round and well-balanced offering complex aromas of candied fruits backed up by a hint of exotic fruit (mango, guava) and white flowers. On the palate, it is ample and fleshy, leading into a silky and long finish.