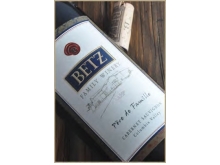 ID No: 441742
Rate This Item
+ Enlarge
No longer available.
Notify me of updates to Betz Family Pere de Famille 2011
Try these Similar In Stock Wines 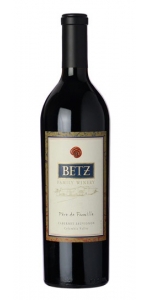 This initial question raised by this vintage of Pere de Famille is how this wine, with such a depth of color, aromatic complexity and balance of the Old World. The answer isn’t precise, but is a reflection of a remarkable Columbia Valley vintage, plus small changes in maturation and the varietal concentration of the final blend. Its inky purple color, muscular structure and plush texture all point to its New World origins. But the aromas of pure, layered black fruits, graphite, crushed rock and lavender (think St. Julien?) lead me back to the Old World. The 2012 Père de Famille has the highest level (90%) of Cabernet Sauvignon that we’ve ever used in this wine. Add to that the high concentration of Red Mountain grapes (84%), deep and structured, and it yields a wine as generous as any Cabernet we’ve made. It showed such density in barrel that we added three months barrel aging to resolve the tannins and body. It’s weighty and yet balanced, fleshy yet fine grained, powerful yet polished. And unabashedly Cabernet Sauvignon, with its black currants, anise/thyme, savory mouth feel and dusty finish. Its dimension and precision indicate long aging ability, but you might be tempted far earlier.

The 2015 Père de Famille is a blend of 87% Cabernet Sauvignon, 9% Petit Verdot, and 4% Merlot that's mostly from Red Mountain aged 20 months in 70% new French oak. This inky colored effort is packed and stacked, with deep blackberry and currant fruits intermixed with lots of graphite, crushed rock, and minerals as well as smoky, violets aromas and flavors. This full-bodied beauty has gorgeous purity and elegance. It needs 2-4 years of bottle age and will keep for two decades. -Jeb Dunnuck 97 Points

A blend of 87% Cabernet Sauvignon, 9% Petit Verdot and 4% Merlot, the 2015 Cabernet Sauvignon Père de Famille exhibits complex aromas of pencil lead, inky dark fruit, wild blueberries, black truffle, incense and anise. On the palate, it's full-bodied, layered and very concentrated, with a deep core of sappy fruit, rich structuring tannins and a long, penetrating finish. This will need some time in the cellar, but it's very complete and full of promise. -Robert Parker 96 Points

SALE!
Washington southern Rhone varieties continue their winning streak, proving to excel in cool and hot vintages. Fans of this
Southern Rhone-inspired wine will note that there’s no Counoise in the 2012 blend as there has been in recent vintages; that variety ripened fine, but they lacked the penetrating character needed to complement the final wine. The Mourvedre fraction (15%) stepped through in the wine, making the 2012 deeper, more structured yet finely layered. Grenache (50%) still dominates the blend, with its creamy black raspberry, wild dried strawberry, dried herbs and floral notes. Cinsault (20%) fills in with its dusty blue notes, and Yakima Valley Syrah (15%) provides more backbone. This is a Bésoleil for the cellar, dense and full, and a few years of aging will expand its Chateauneuf-like appeal.

"The only other 2013 reviewed on this go around (most were reviewed last year), the 2013 Clos de Betz checks in as a blend of 63% Merlot, 15% Cabernet Sauvignon and 22% Petit Verdot, mostly from Red Mountain and Yakima Valley, that spent 19 months in French oak. Sexy, supple, perfumed and beautifully complex, with notes of currants, dried flowers and an almost garrigue like perfume, this full-bodied beauty is already impossible to resist, yet will absolutely cruise for another 10-15 years. - Jeb Dunnuck"
- Wine Advocate (Issue #225, June 2016), 94 pts

Washington southern Rhone varieties continue their winning streak, proving to excel in cool and hot vintages. Fans of thisSouthern Rhone-inspired wine will note that there’s no Counoise in the 2012 blend as there has been in recent vintages; that variety ripened fine, but they lacked the penetrating character needed to complement the final wine. The Mourvedre fraction (15%) stepped through in the wine, making the 2012 deeper, more structured yet finely layered. Grenache (50%) still dominates the blend, with its creamy black raspberry, wild dried strawberry, dried herbs and floral notes. Cinsault (20%) fills in with its dusty blue notes, and Yakima Valley Syrah (15%) provides more backbone. This is a Bésoleil for the cellar, dense and full, and a few years of aging will expand its Chateauneuf-like appeal.

Washington southern Rhone varieties continue their winning streak, proving to excel in cool and hot vintages. Fans of thisSouthern Rhone-inspired wine will note that there’s no Counoise in the 2012 blend as there has been in recent vintages; that variety ripened fine, but they lacked the penetrating character needed to complement the final wine. The Mourvedre fraction (15%) stepped through in the wine, making the 2012 deeper, more structured yet finely layered. Grenache (50%) still dominates the blend, with its creamy black raspberry, wild dried strawberry, dried herbs and floral notes. Cinsault (20%) fills in with its dusty blue notes, and Yakima Valley Syrah (15%) provides more backbone. This is a Bésoleil for the cellar, dense and full, and a few years of aging will expand its Chateauneuf-like appeal.

"Possessing even more Merlot than the 2014, the 2015 Clos de Betz is 75% Merlot, 15% Cabernet Sauvignon and 10% Petit Verdot brought up in a mix of barrels. Its chocolatey plum, tobacco leaf, licorice and damp earth aromatics give way to a medium to full-bodied, polished, pretty style on the palate that shines for its elegance and freshness. - Jeb Dunnuck"- Robert Parker's Wine Advocate (Issue #231, June 2017), 92-94 pts 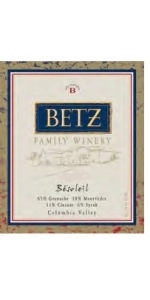 Betz Family Besoleil is made from 55% Grenache, 23% Mourvèdre, 11% Syrah and the rest Cinsault,

Grenache speaks loudly in the Bésoleil with notes of pomegranate, red raspberry, and strawberry leaf. The Counoise and Cinsualt bring bing cherry fruit and blueberry notes to the table, complicated by pepper and garrique. Mourvedre donates a wild meatiness to the blend, and a purple hue. Syrah rounds things out, adding texture, and flesh to the palate.

"Bright raspberry and red-plum fruits with attractive depth and freshness. This has all you want in a Rhône-style blend. Good depth of flavor and focused structure." 93 pts - James Suckling

"Moving more and more from Olsen Vineyard, which is 20 miles northwest of Red Mountain (where they love working with the grower, who is proactive and responsive), the medium ruby/purple-colored 2016 Besoleil is 55% Grenache, 23% Mourvèdre, 11% Syrah and the rest Cinsault, all aged in a mix of neutral barrels. It offers beautiful notes of red plums, blueberries, white and black pepper and herbs de Provence, medium to full-bodied richness, a silky, elegant style, and integrated acidity. It's another beautiful vintage of this wine that will keep for a decade."  92 pts. - Jeb Dunnuck 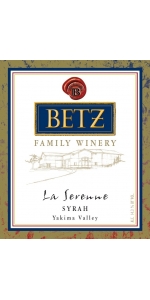 Talk about hang time: we harvested 100% of our Cabernet Sauvignon this vintage after October 10, most of it in the final days of the month. This is a record for us and reflects the cool start to the season. Those lazy days of slow ripening led to an intensity of flavor and completeness of Cabernet’s penetrating character. It retains the vitality of a cooler vintage, but with the black currant, plum and black cherry of fully developed Cabernet. Part of that is due to the highest concentration yet of Cabernet Sauvignon in the Pere de Famille, 88%. Merlot and Petit Verdot play minor roles, so this wine is unapologetically Cabernet.

"As with the 2011 Clos de Betz, the 2011 Cabernet Sauvignon Pere de Famille is a softer, more approachable version of its 2010 counterpart. A Cabernet Sauvignon-dominated blend, it offers up a pretty, perfumed bouquet of jammy raspberry, cassis, tobacco and assorted floral nuances to go with a full-bodied, seamless and elegant profile on the palate. Where the 2010 will require cellar time to become civilized, this should be reasonably approachable on release; nevertheless, it should evolve gracefully given its overall balance and purity. - JD"
- Robert Parker’s The Wine Advocate (Issue #207, June 2013), 93-95 pts

We raise our glasses to all of you and say;
alla famiglia – to our family!

Since our first vintage in 1997 we’ve had a single minded goal of crafting compelling wines with individual character that are approachable and ageworthy, and which showcase Washington as a distinguished wine region of the world.
By carving out specific vineyard blocks and being meticulous in the vineyard and cellar we are able to achieve the quality we aspire to.

As importantly over the years our winery culture has become a way of life in which everyone – our growers, winery team and customers are family.

Today, Betz family Winery is headed by our two families, both committed to be true to our heritage, our family members, and true to what Betz winery embodies: wines of dimension and pleasure, wines that allow the character of Washington to shine through. They are a blend of the best elements of the new and the old worlds; full ripe fruit and yet structured for longevity.

We believe our best wines are yet to come.

Washington’s Columbia Valley is one of the world’s blessed sites to grow classic wine grapes.

The colour is purple-tinged garnet.The aromatic range of the nose goes from fresh berries (wild raspberry, blackcurrant, blackberry) to spices.The palate is big and full-flavoured, with silky-smooth tannins and aromas of the fruit already mentioned. The finish introduces touches of liquorice and pepper. A Côtes du Rhône with great complexity for an every day drinking.

A classic Rhône to drink between 1 and 4 years. Best poured at 17°C.

Traditional wine making and ageing is performed in vats only. Bottling after 10-12 months.

Ideal throughout the meal, but particularly with poultry and other white meats, as well as mild cheeses.