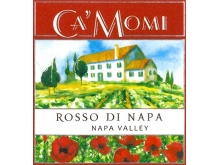 ID No: 423704
Rate This Item
+ Enlarge
No longer available.
Notify me of updates to Ca' Momi Rosso di Napa 2011
Try these Similar In Stock Wines 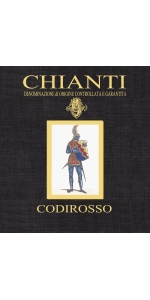 Codirosso Chianti is made from 90% Sangiovese, 7% Canaiolo, 3% Colorino.


Vinification: fermentation in stainless steel at controlled temperatures for 7 to 8 days with an additional 7 to 8 days on the skins. The juice is pumped over daily for 10 days at the beginning of the fermentation. The wine is then racked and goes through malolactic.


Ruby red color with purple reflections. Intense vinous bouquet with hints of violets and dark cherry fruit.The flavor is full of ripe fruit and a hint of spice. It is well balanced and dry. The finish is persistent and satisfying. 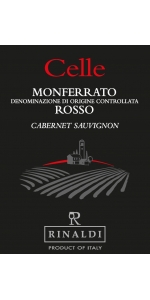 Celle is the name of the vineyard and literally means prison. But the roots of its name sink in history, since in 1800 the tradition wanted that in the best hill of the territory everybody had small pieces of land called "cells".

The wine shows a very nice vibrant red color with glints of bordeaux. It reveals the typical and beautiful intensity of the Cabernet Sauvignon. The nose is spicy and the palate is very smooth and long. There is a balance of acidity with sweet tannins and red fruits notes. It's a very fresh wine.

The end of the alcoholic fermentation takes place in French oak barrels. Aging for 4 months. 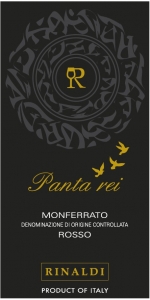 Rinaldi Panta rei Monferrato Rosso is a blend of 50% Barbera and 50% Cabernet Sauvignon.

This wine is quite tasty, smooth, silky and powerful.
It is loaded with dried red fruit notes from the appassimento of the grapes and it also has a lot of spicy aromas and flavors from the oak ageing.

Grown on limestone soils.
The average age of the vines is 30 years old.
10% of the wine is appassimento. Appassimento is an Italian term for drying harvested grapes, traditionally on bamboo racks or straw mats, for a few weeks up to several months to concentrate the sugars and flavors. This process is used in making Amarone, Recioto and Sforzato.
This drying method is not traditional in Piemonte but is popular in other part of Italy like in the Veneto region.
Thanks to this new method the wine is rounder and softer, boasts beautiful notes of red dried fruits.
Pantarei is aged 14 months in French oak ((the wood is Allier, medium toast) barrels and 6 months in bottle before release. 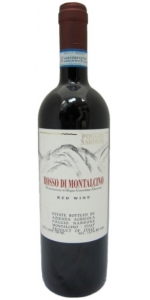 Intense ruby red color with garnet tints.
Intense and delicate aromas of fresh fruits with notes of cherry.
Dry red wine with a good strength and freshness, along with a nice aromatic persistence.

The 5 hectares of specialized vineyards in Montalcino are at an altitude of 350 meters above sea level and are surrounded by woodlands of ilex, oak and arbutus which are characteristic of Montalcino’s hillside habitat. The soil is predominantly composed of marl and limestone which renders this terrain particularly rich in mineral salts. 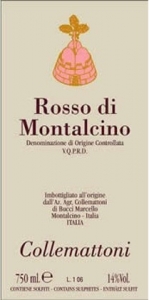 Coming from a parcel with 8-13 year old vines planted in sandy clay and marl soils.Harvest is 100% destemmed with a soft pressing, fermentation in stainless steel tanks at controlled temperature of 28-30°C, pumping over for the first week of maceration followed by skin-contact maceration for 20-25 days with rack and return technique (delestage).Malolactic fermentation completed.Wine is slightly filtered before bottling. 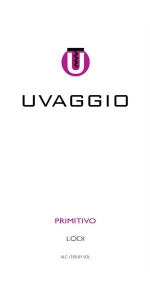 Harvest in mid Sept was followed by several days of cold maceration, after which the must was inoculated with a fruit enhancing strain of yeast. Immediately following the primary fermentation and pressing, the wine went into older neutral barrels for a malo-lactic conversion. While only minimally handled, late spring of the following year it was racked and we blended in a small percentage of Barbera, to enhance its expression and add complexity. Aging continued for another three months in neutral oak cooperage.
Bottled in Aug 2016; 14.9% alcohol, pH 3.58 & TA 6.0 g/l

"A wine for grown-ups, this is big but balanced and dry in style. It matches impressive layers of just-ripe blackberry and black-plum flavors with a sturdy structure of fine-grained tannins that clean the palate easily. It has considerable depth and focus, indicated by how the dark fruits seem to keep increasing in intensity even on the finish. - JIM GORDON"

Rosso di Napa has bright strawberry and raspberry flavors with a velvety texture and full mouth feel. Its round, medium-bodied and complex palate is loaded with fruit.

The Ca'Momi Estate
When Dario de Conti, Valentina Guolo-Migotto and Stefano Migotto came to America, they wanted to make wine in Napa Valley, while capturing the spirit of their Italian heritage. They take great pride in selecting premium sources of their wine grapes with the majority of the fruit coming from Napa Valley and the rest from other carefully selected areas of California.

Napa Valley is renowned for its Cabernet Sauvignon, and also applauded for producing elegant Merlot, Chardonnay, Pinot Noir, Zinfandel and Sauvignon Blanc. In addition to Ca’ Momi’s wide variety of red and white still wines, they produce Ca’ Secco, the first ever Prosecco-style sparkling wine made in California.

The house in the watercolor painting on our label (see image at right) really is Ca' Momi, our house in Veneto Italy.

We named the house in honor of Momi dea Bionda, a local character who was famous for his obsession with the house, his grapes and his wine. We liked the idea of keeping the memory of him alive. Momi was a memorable character. In his later years, he would ride around the property on an old Moto Guzzi motorcycle withthat had a sidecar attached. Across his lap he carried a rifle, to scare away those hoping to steal a taste of his grapes, and in the sidecar rode his best friend Lidia, a faithful dog who continued to ride in the sidecar even after she went blind. Some of the locals say that he haunts our home. We prefer to think that his ghost is just keeping an eye on things. His dog, too. We love the idea that Momi still watches over our home and its vineyard. In fact, we think we have seen him quite a few times.

Rinaldi Moscato d'Asti Bug Juice is made from 100 percent Moscato.

Straw-yellow color. The bouquet is delicate and intense with aromas of fruit (apple, peach) and spices (sage). The palate is sweet and smooth with lingering aromatic persistence. A refreshing and pleasant wine, perfect for brunch, picnics or poolside.

The training system used is Guyot with a density of 2500-3000 vines per hectare Manual harvest into crates. Soft pressing. Settling in steel vats to allow natural clearing of musts. Racking, increase in temperature. Temperature and pressure controlled fermentation until bottling.

Dessert, ideal with hazelnut cake. Original with "strong" cheese such as Robiola of Roccaverano and Gorgonzola.