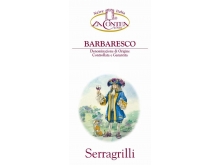 COMMENTS Deep red in colour. The nose is lifted and expressive with lovely Christmas cake and mint characters along with black olives and tobacco leaf adding complexity. The palate is medium to full bodied with blueberry and hints of cassis as the primary fruit flavours. The palate has great poise with the vibrant fruit, spicy French oak and fine tannin structure all wonderfully balanced, and the wine finishes with great length of fruit. VINIFICATION NOTES The fruit was harvested at night. Fermentation was carried out in a variety of small capacity fermenters. After pressing the parcels were filled to French oak for maturation. The wine was racked after six months and the parcels were blended to form the final wine. MATURATION The wine was matured in a temperature controlled barrel hall for 16 months in French hogsheads (barrels). VINTAGE NOTES Average winter rainfall in 2009 resulted in good soil moisture in the 2010 growing season. This combined with moderate weather conditions through most of the growing season allowed for good fruit set and canopy development.  HARVESTED March 2010 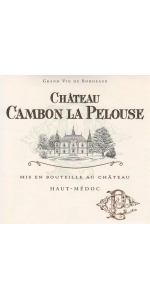 This shows something of Margaux's—the neighboring appellation—delicacy, allied with firm, dry tannins. It has the dense structure and ripeness characteristic of the vintage, with a rich black-fruit flavor and acidity. It's a wine for long-term aging."
- Wine Enthusiast (February 2013), 91 pts 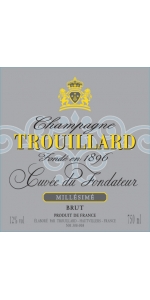 Its sparkling gold color is vivid and bright. The aromas are floral and honeyed with a wisp of vanilla. The palate is elegantly full with ripe white peach flavors and toasty overtones but balanced with a lively freshness, and delicacy on the long finish.

A beautiful tribute to the top champagne produced at the Maison Trouillard and a decadent partner to foie gras! 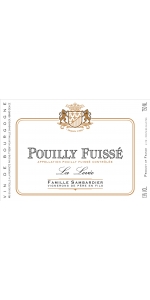 The wine is very aromatic, with brioche, butter and citrus flavors.
The length to the finish is long and balanced with great acidity and richness.

Hand harvested. Grapes were sourced from a vineyard in the village of Solutré.
10% of the wine was aged in French Oak barrels.

The wine is very aromatic, with brioche, butter and citrus flavors. The length to the finish is long and balanced with great acidity and richness.

Hand harvested. Grapes were sourced from a vineyard in the village of Solutré. 10% of the wine was aged in French Oak barrels. 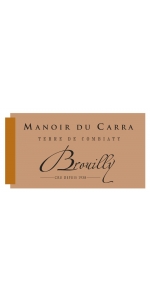 Parcels in the lieu-dit "Combiaty", within the village of St Etienne la Varenne. The soils are dry, made of pink granite which gives the wine its tipicity.

The average age of the vines is 50 years.
Yield is 45-50hl/ha
Manual harvest; Aging on the lees in foudre for 3-4 months; Slight filtration.

Tasting notes: This wine shows nice aromas of roses or violets with flavor notes of cherry, truffles, fennel and licorice. As the wine ages, it can develop smoky notes and more earthy and gamy flavors such as leather and clove. This wine can be aged for a few years, but the tannins are already quite well integrated. Enjoy with grilled red meat dishes and cheeses.

The La Contea di Neive Estate
The wine is a living material, with an exact date of birth, an evolutionary path and an end determined by its ability to continue over the years. Each wine should be tasted at the best time of its evolution, because only then will express their optimum harmony on the type to which it belongs.

The care for the quality, love for their land and why not, by the ambition to compete with the production of wine, real engine of the agricultural economy of Alba, was born, the work of Tonino Verro, in the early 90 a small farm, with appropriate technology, also known as La Contea. Tonino's commitment also extends to the vineyards spread over the hills of the Langhe and Roero and the production decision is aimed at the quality, the lower yield of the strains has increased the structure of the wines, the concentration in color, fruity fragrances and in complexity of taste.

As the restaurant is owned by Tonino so the farm is in the hands of Claudia. Match of the few vineyards of ownership, increased by all the vineyards in the best surì acquired, we now offer a very special wines from grapes treated with natural methods and organic farming, especially with so much passion.

The La Contea di Neive Vineyard
Barbaresco became a DOC in 1966 and it has been a DOCG since 1980.

Xavier Vignon Ventoux Rouge is made from 60% Grenache and 40% Syrah.

Deep dark ruby color with crimson reflects, the wine offers on the nose some hints of black fruits, Provencal spices and garrigue. The mouth is ample with a great freshness yet some concentration. Medium finish with hints of red and black fruits.

The rest of the blend was aged in concrete to preserve the fruit purity.Some grapes (Grenache & Syrah) are co-fermented for more complexity. A small batch of extremely old Syrah has been aged in barrel.
Most of the time, Ventoux offers superb climatic conditions especially in the higher altitude parcels. In 2016 for instance, grapes were harvested in a perfect sanitary state. Both technological and polyphenolic ripeness were close to perfect.