Rheingau is a wine region in Germany that is named after the traditional region and translates to, “Rhine District.” Located in the state of Hessee, Rheingau is part of the Theingau-Taunus-Kreis administrative district. Although the region only makes up 3% of the German vineyard area, it historically significant, and includes many producer that have an international reputation. There were 7,720 acres of vineyards in 2008 with 78.8% being Riesling. Pinot Noir and Muller-Thurgau make up the rest.  The region is best known for its small viticulture sites, perfect microclimate, and amazing landscape. Reheingau has a cool-continental climate with an annual temperature of 50° and only 21” of rainfall per year. Located on the River Rhine next to the villages of Lorch, and Assmannshause, Rheingau is almost 50 kilometers long, and rises to the Taunus Mountain Range. Most of the vineyards are located on the slopes facing south between the mountains and river, which makes for excellent wine-growing conditions. As early as the 12th century, grapes were planted in Rheingau. There was more red than white wine produced during this time and it was usually Gemischter Satz. During Medieval times there was more red wine produced and was usually Gemischter Satz. The Rheingau region is known for late harvest wine. 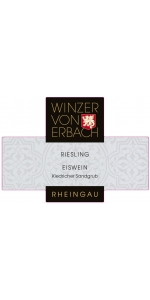 Winzer von Erbach Riesling Eiswein is made from 100 percent Riesling.

The Eiswein has aromas of concentrated yellow fruit and a fruity sweetness. It's a high end product with a very long aging potential.
The grapes were picked frozen which resulted in a concentration of sugar, acidity and aromas and a low yield. 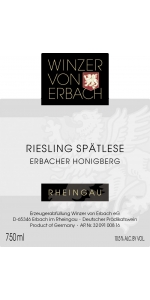 Honeyed style, rich minerality and luscious creaminess. Flavors of baked pineapple and pear. Fresh and juicy on the finish.

From the famous Erbacher Honigberg vineyard. Average of the vines is 20 years old.

Cool fermentation, matured on the lees for 2 months before bottling, with a slight filtration.

Very aromatic, with rose petal, peach and honeysuckle aromas. Full bodied, bright, zesty and crisp, this wine is extravagant and extroverted.
This wine has been awarded with silver and gold medal on a regular basis for the last decade.