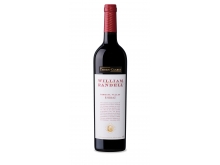 ID No: 10420
Rate This Item
+ Enlarge
No longer available.
Notify me of updates to Thorn Clarke William Randell Shiraz 2010
Try these Similar In Stock Wines 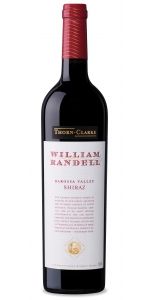 Thorn Clarke William Randell Shiraz is made from 100 percent Shiraz

The William Randell range of wines were created in honor of our family ancestor - the esteemed pioneer William Richard Randell (1824 - 1911). The wines are sourced solely from grapes grown on our estate vineyards. Wines in this range are only made in exceptional vintages.

Deep red with inky purple hues. This classic Barossa style shows rich blackberry, licorice, spice plum and smoky oak on the nose. The palate is dense with ripe mulberry and berry compote and generous supporting oak. The tannins are savory and long with spicy refined finish

Following harvest the fruit was crushed into a variety of small fermenters (4 to 6T in capacity). Fermentation was carried out at a warm temperature (25-28 degrees ). The ferments were manually pumped over to provide good control of tannin extraction. Each fermenter was treated as a separate parcel of wine and once dry was filled to American oak (40% new). Following malolactic fermentation the wines were racked and returned to the same oak. Parcels remained in barrel for an average of 18 months prior to blending. Only the best barrels from the multiple parcels were used to make the final blend. Once blended the wine was prepared for bottling.

"This has impressive freshness of blue fruit and cola-like spices with blackberries and forest wood, as well as a blue-floral edge and some plum cake. The palate has a very vivid feel with such intense, fleshy fruit-presence that carries a long, succulent and flavorful finish. Impressively fresh. Drink over the next decade." 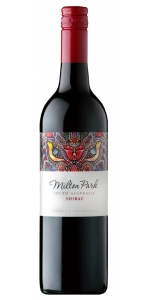 Deep red color. The wine is deep and rich smelling with dark fruits, plums and spice with some good oak. There is very rich fruit on the palate with plums, blackberry and sweet spice from the oak. The palate is vibrant and young with a flavorsome viscous mouthfeel which will develop complexity with time. There are some slightly chewy tannins which will soften with time and there is great length of fruit flavor. 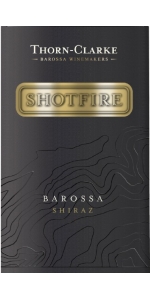 Thorn Clarke Shotfire Shiraz is made from 100% Shiraz.

Striking deep red-purple in color. A rich, voluptuous wine with aromas of blackcurrant and mulberries accompanied by notes of smokey oak and hints of cloves. The palate is filled with dark fruits and chocolate backed up by taut tannins and lingering oak.

This is an attractively spicy wine on the nose with red, blue and black berries all in play, as well as an earthy edge and tarry elements. Some perfume, too. The palate has quite a deep-set, blue and black-fruit core with a long, sturdy palate that holds flavor and focus well. Drink or hold. Screw cap."

When the Clarke forebearers discovered gold in 1870 at the Lady Alice mine in the Barossa goldfields, so began a family dynasty intrigued by geology. A fine legacy that is reflected today in the terroir of our vineyards. The Shotfire range immortalizes the Shotfirer's hazardous job of setting and lighting the charges in the mines.

Fran shares his story on how he discovered Thorn-Clarke:
"It was October 2001 and I was searching for and sourcing for Australian wines, as it was clear that Australia was going to become the "next big thing." After tasting about 100 assorted wines, I decided I liked the style of Barossa, Shiraz best - chocolate, cherries, mint and eucalyptus - so I started focusing on Barossa growers (years later, Barossa Shiraz would develop its reputation as the Icon Shiraz for Australia).
Late on a Thursday afternoon, the carrier delivered a beat-up box of 12 bottles from Australia, 10 of which were leaking. The box was from a guy named Steve Machin, who had just left Hardy's and was beginning work with the Clarke family on setting up a possible new brand. The samples were sticky and messy, but I popped the corks anyway ..... and I was glad that I did. The wine inside tasted like Christmas - mint, eucalyptus, camphor, and evergreen aromas. Great acidity, color, flavor and length of finish - very tasty. These samples were so good and so exciting, especially compared to what I had tasted prior, that I immediately called the number on the card. I didn't realize that it was a Perth number (Western Australia) and it was actually 3:00 in the morning. It turned out I was calling the residence of David and Cheryl Clarke, where a sleepy Cheryl answered the phone. I told her, you don't know who I am, but we are going to be doing business together very soon, and lots of it! After a few months of talking, faxing (yes, faxing) and sorting out the details, I began importing their wines.
That super-star wine from the busted box of samples is the wine we know today as Shotfire Shiraz. It was originally called Stone Jar, but fortunately we came up with a better name. Many years and vintages later, I'm still glad to be importing Shotfire Shiraz and other Thorn-Clarke selections .... and I'm still glad that Cheryl Clarke woke up for that phone call." 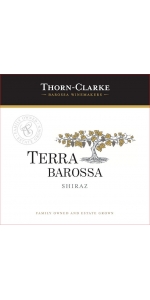 Thorn Clarke Terra Barossa Shiraz is made from 100 percent Shiraz

Deep purple red. Aromas of ripe plums, cherries and earth with subtle notes of vanilla and cloves. The aromas follow through onto the palate with a fruit focus, subtle oak notes and soft, rounded tannins. The wine walks the line between medium and full bodied with a plush mouthfeel.

The grapes are crushed and de-stemmed into fermenters. Yeast is added immediately once in fermenter and the ferments are pumped over twice daily to maximise colour, tannin and flavour extraction. Cooling is used to ensure ferment temperatures remain in the 22-25 degree celcius range which will allow the fruit to display maximum fruit expression. Pressing then occurs approximately seven days after crushing and the  wine is then put into predominately American oak to mature. 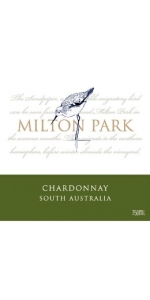 The 2010 William Randell Shiraz was awarded the Trophy for the Best Barossa Shiraz and also Best Australian Shiraz against a field of outstanding wines.

According to IWC Co-chairman Charles Metcalfe, South Australia reaffirmed its status as the powerhouse of quality wine production in Australia, winning 10 of the 23 Trophies awarded to Australian wines at the 2013 IWC.

"Seven of the trophy-winning wines were made from different varietals, demonstrating the rich varietal and stylistic diversity within South Australia’s borders."

Thorn-Clarke Chief Executive Sam Clarke, speaking from the London Wine Trade Fair today, said that Australian winemakers can take heart from the high standards they set both domestically and internationally.

"Australian wines are consistently setting the pace for elegance and balance and they are worthy ambassadors of Australian culture,” he said.

“With an ever-strengthening reputation for quality, effective point-of-origin regulation and clean, green credentials, Australian wineries continue to be among the nation's most successful exporters.

Mr Clarke said the 2010 William Randell Shiraz was awarded 97 points and a ranking in James Halliday's Top 100 wines for 2012 late last year. The company had also taken out three trophies for their Shotfire and Terra Barossa Cabernet Sauvignon/Shiraz blend in the Great Australian Red competition recently.

Mr Metcalfe said the International Wine Challenge was rightly described as the "Oscars of the wine world" and a trophy win should not be under-estimated.

“The International Wine Challenge is unique and is widely regarded as the finest judged wine tasting in the world," Mr Metcalfe said.

"I know of no other wine competition in the world where each medal winner will have been blind tasted a minimum of three separate occasions to ensure consistency and fairness."

“Inky purple-crimson; as the colour promises, a wine saturated with every manner of black fruits and bitter chocolate; despite this, it has an open-weave texture keeping it light on its feet, and allowing a farewell of juicy fruit finding its way through the high quality oak and fine tannins. An exceptional shiraz.” – 97 Points & Top 100 James Halliday

Deep red / purple colour, the nose displays lifted spice with layers of dark chocolate, mocha and Christmas cake. The palate is rich and full bodied with blackberries, cassis and mocha oak notes which characterise this intensely flavoured Barossa Shiraz. The wine is mouth filling and satisfying with its creamy texture and fine silky tannins. The wine has great length with lingering flavours of blackberry fruit and well integrated oak.

The fruit was harvested at night. Fermentation was carried out in a variety of small capacity fermenters.  After pressing the parcels were filled to French oak for   maturation.  The wine was racked after six months and the parcels were blended to form the final wine.

Average winter rainfall in 2009 resulted in good soil moisture in the 2010 growing season. This combined with moderate weather conditions through most of the growing season allowed for good fruit set and canopy development.

The Thorn Clarke William Randell Vineyards
William Randell is sourced from Thorn-Clarke's 33 hectare Kabininge vineyard (81.51 acres) is true Barossa Valley floor terroir. This is the oldest of their 100% family-owned vineyards and is situated in the heart of one of the great wine regions of the world - the Barossa Valley. Kabininge is planted predominantly to Shiraz - the variety for which the Barossa Valley is best known - supported by smaller plantings of Cabernet Sauvignon and Cabernet Franc. At just 270 metres above sea level and located on dark grey to dark brown carbonaceous soils (known as Bay of Biscay soil) red winegrapes ripen easily here. By monitoring soil moisture levels to limit yield and berry size, we can achieve exceptional red wines with superb varietal flavor and concentration.