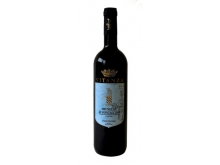 ID No: 443286
Rate This Item
+ Enlarge
No longer available.
Notify me of updates to Vitanza Brunello di Montalcino Tradizione 2011
Try these Similar In Stock Wines 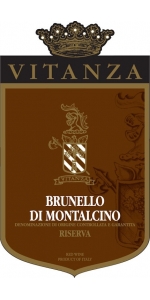 Aromas recall scorched earth, underbrush, stewed prune and coconut. Oak spices, vanilla and coffee dominate the warm palate. It lacks fruit richness and can’t stand up to the assertive tannins or the heat of evident alcohol.

"The 2009 Brunello di Montalcino Riserva is the nicest wine presented by Tenuta Vitanza this year. This expression definitely shows its oaky side but that new oak style (French tonneaux primarily) is characteristic of this estate located in the Torrenieri subzone that makes some of the darkest and most extracted expressions of Brunello regardless. Dark fruit, prune, plum, cherry, spice, cedar, cardamon and grilled herb all compete for your attention. The ensemble is bold, opulent and rich in a way that most other Brunello wines are not. There is a note of sourness on the tannins. Every once in a while you need a supersized Brunello to pair with that T-bone steak you crave. — Monica Larner"
- Robert Parker's The Wine Advocate (Issue 217, February 2015), 90 pts 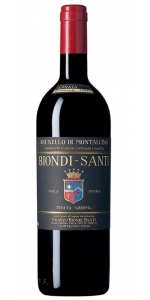 The Biondi-Santi flagship wine, the Brunello di Montalcino embodies the spirit of Tenuta Greppo and the signature style of our winemakers, forged over 150 years of history with its balanced combination of fresh elegance, depth and aristocratic personality.

The quite warm spring was followed by a dry and sunny summer begin. The month of August had temperatures in line with previous years but with some light showers in the second part. A cool September with some rain in the week right before the harvest, which began on September 10th.
ORIGIN
The 2012 Brunello was produced with our proprietary clone of Sangiovese Grosso called BBS11 (Brunello Biondi Santi 11), which was identified and selected by Biondi-Santi at Tenuta Greppo in the Seventies. For this Brunello we exclusively used grapes from the vines with between 10 and 25 years of age.
AGEING
The 2012 Brunello was aged in Slavonian oak barrels for 3 years. It benefited from a long refinement in the bottle.
ALCOHOL CONTENT
13.5% 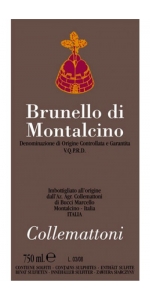 Collemattoni Brunello di Montalcino is made from 100 percent Sangiovese.

Coming from a parcel with 10-15 year old vines planted in sandy clay and marl soils.Harvest is 100% destemmed with a soft pressing, fermentation in stainless steel tanks at controlled temperature of 28-30°C, pumping over for the first week of maceration followed by skin-contact maceration for 20-25 days with rack and return technique (delestage).Malolactic fermentation completed.Wine is slightly filtered before bottling.

"Good full red. Perfumed aromas of red cherry, kirsch, mocha and herbs on the inviting nose. Despite its size, this is graceful and impeccably built, with very precise flavors of red plum, blueberry, milk chocolate and minerals that expand and broaden on the long, seductive finish. Outstanding Brunello that offers both size and refinement. In my opinion, Collemattoni is a very underrated, off the radar Brunello estate but its wines deserve to be better known. - Ian D’Agata." 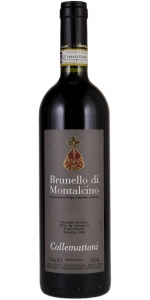 Collemattoni Brunello di Montalcino is made from 100 percent Sangiovese.

Coming from a parcel with 10-15 year old vines planted in sandy clay and marl soils.Harvest is 100% destemmed with a soft pressing, fermentation in stainless steel tanks at controlled temperature of 28-30°C, pumping over for the first week of maceration followed by skin-contact maceration for 20-25 days with rack and return technique (delestage).Malolactic fermentation completed.Wine is slightly filtered before bottling.

"Aromas of plum and cherry with some cedar and walnut that follow through to a full body with a dense, structured palate and powerful tannins. Very long and persistent. Muscular. Best ever. Drink after 2024." 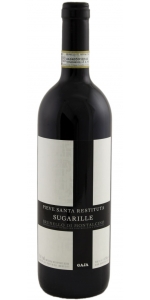 Gaja Sugarille Brunello di Montalcino is made from 100 percent Sangiovese.

When the Gaja family purchased the historic Pieve Santa Restituta estate in 1994, they did so in the hopes of bringing their expertise and winemaking style to this appellation. Today, Sugarille (SOO-gah-REEL-leh) is considered one of the top expressions of Brunello di Montalcino. According to archives found at Pieve Santa Restituta, the Sugarille growing site was already devoted to the cultivation of grapes for wine by the mid-16th century (1541). The name Sugarille, is derived from the Latin suber, meaning cork oak, possibly because cork trees were found there. Select vintage, with an ageing potential better than 2010. Juiciness and concentration are the features of the 2016 vintage with shows elegance and drinkability.

The 2016 Brunello di Montalcino Sugarille is a sleeping giant. Cool-toned, poised yet wonderfully elegant, it lifts from the glass with a gorgeous display of lavender and purple-tinged florals before giving way to crushed stone, blackberries and a hint of sour citrus. It’s silky and soft with a dense core of primary fruits, which creates a monolithic feel today yet tempts the imagination with what’s to come. Brisk acids, salty minerals and fine-grained tannins combine, adding clenching grip yet also further depths, tapering off to hints of tobacco and spiced orange. Its scale is large, yet so is its potential, as this well-muscled Brunello is geared for the cellar and sure to make a lot of people happy over the next ten to twenty years.

"Plenty of black cherries, cedar, dried flowers and red cherries on the nose, following through to the palate, which is dense and compressed with gorgeous, intense fruit and chewy yet integrated tannins. Very, very impressive red here. Try after 2024." 11/020
-James Suckling  98 Points 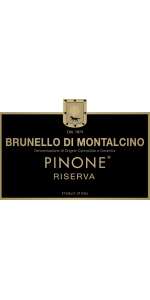 Pinone Brunello di Montalcino Riserva is made from 100% Sangiovese.

Deep ruby-red with garnet hues. Intense fresh aromas of cherries and raspberry. Full, round and silky with aromas of blackberry and plum. Full-bodied and elegant with fine tannins and spicy oak notes in the finish.

Average age of the vines is 20 years. Wine went through malolactic fermetation. It was slightly filtered before bottling.

"This shows wonderful precision and focus on the nose with dried flowers, crushed stones and dark-berry character. Full body, firm and chewy tannins and a long and intense finish. Some pine needles and dried spices on the finish. Needs time to soften. Try in 2021."

"Pinino dates back to 1874, when it was established by Tito Costani beneath the Montosoli hill. Today it is co-owned by an Austrian couple and a Spanish couple, working with consulting oenologist Paolo Vagaggini. Touches of flint and incense counter more overt notes of balsamic herbs and dark cherry. Silky, layered tannins build on the palate to become surprisingly powerful. This will need a couple of years before approaching. Drinking Window 2020 - 2032."

The Brunello di Montalcino is a very sensual and appealing wine. It boasts a ripe and upfront style: What it gives up in typicity, it makes up for in approachability. It shows a brooding dark color, thick extraction and meaty consistency. Dusty mineral notes of terracotta and crushed granite offer a brief prelude to thicker aromas of cured meat, leather and dark fruit. There's a good degree of succulent sweetness thanks to the abundant tones of prune and plum. The plate is richly layered and velvety.

Wine-making: Pre-soaking in a cold temperature for three days; pump-overs following the density and the temperature under computer control. Bottle refinement: 12 Months

The Tenuta Vitanza Estate
The story of Tenuta Vitanza begins in 1994, when Rosalba Vitanza and her soon-to-be husband, Guido Andretta, spent a romantic weekend in Montalcino.
Rosalba has a PhD in Philosophy, and was teaching at the University of Rome, La Sapienza branch.  Guido Anderetta was working as an aerospace engineer, running his own consulting business based in the United Kingdom and the U.S.A.
In 1994, they united their efforts behind the purchase of Podere Rensione, a country home with two acres of vineyards.  Their first vintage was 1995 and the couple received 93 points from the Wine Spectator.  Today, they own 80 acres of vines (not all in production year), and have a long-term goal of 15,000 cases of production.  Since 2002, the couple has been building a modern, gravity flow winery, computer controlled, and wi-fi connected, in the town of Torrenieri.  The winery has 13 large stainless steel tanks, each signifying a specific vineyard area.  Also, the winery has been designed with total traceability, meaning that each bottle is numbered.  In the future, you will be able to access their website, punch in the bottle’s number, and receive the following information:
·        bottle type
·        cork used
·        kind of aging & how much time
·        vineyard location & exact parcel
·        weather that particular vintage 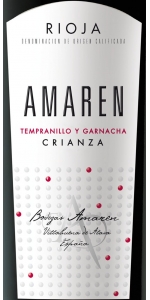 Amaren Rioja Crianza is made from 85% Tempranillo and 15% Garnacha

The wine is truly attractive, transmitting the finesse and elegance of the Tempranillo and the fresh, delicate fruitiness of the Garnacha. A balanced combination which is far from an excessive complexity, corpulence or over extraction to achieve the goal set by the bodega: to make a “RICH” wine in capital letters. With a nose in which the fruit character with floral nuances and strawberry toffees will stay with you all through its passage through the mouth, where you can sense its power, but with an elegance, enchanting you with its great balance until the long finish with heady notes of red fruit typical of the best garnachas from the Rioja Alavesa.

Only the perfect grapes are used to produce this wine. Amaren Crianza is the pursuit of perfection in all areas: the vineyard, the selection process, winemaking method and ageing.

Made from 85% tempranillo and 15% garnacha from vines with an average age of 35 years, the grapes are selected on a dual sorting table, first a manual check of the clusters and then individual berries.
Both varieties are harvested, vinified and aged separately to extract their optimum potential and obtain aromatic complexity.
After vinification the wine is cask aged for 12 months in 50% new, American-oak barrels and 50% in French-oak barrels used for a second vintage.
Tempranillo brings to the wine typical finesse, elegance and true expression of the characteristics of the best soils of Rioja Alavesa. Garnacha is the ideal complement that brings notes of red fruits, freshness and delicacy.

"Deep ruby. Oak-spiced cherry and blackberry aromas and flavors are complemented by a suggestion of mocha that gains strength as the wine opens up. Plush and seamless in style and showing no rough edges. Rich yet lively; a peppery note adds a spicy kick on the back half. Gentle tannins shape the impressively persistent finish, which leaves a hint of bitter chocolate behind. - Josh Raynolds"
- Antonio Galloni's Vinous (May 2017), 91 pts 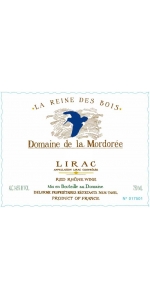 "The 2014 Lirac Cuvee de La Reine des Bois is an incredible effort that transcends the vintage and is easily the wine of the vintage from Lirac. Possessing fabulous purity and elegance, with medium to full-bodied richness, classic notes of crème de cassis, caramelized meats, violets and licorice, sweet tannin and a great finish, I doubt it will be the longest lived example of this cuvée, but man, hats off to the team for this killer wine in a difficult vintage! - Jeb Dunnuck"
- Robert Parker's Wine Advocate (Issue 227, October 28th 2016), 93 pts