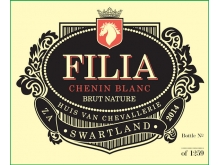 No longer available.
Notify me of updates to Filia Sparkling Chenin Blanc 2013
Try these Similar In Stock Wines 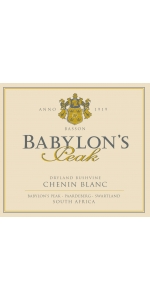 
The Chenin Blanc grapes were picked from very old dryland bushvine vineyards. The vineyard grows on weathered granite soils, contributing to the flavor of the grapes and mineral character of the wine. Production is limited to 5 tons/ha.
The grapes were harvest by hand at 22.1°B. The grapes were destalked and lightly crushed. Only the first 450 litres free-run juice per ton were fermented in stainless steel tanks at a cold temperature (10-12°C) for 21 days. The wines was left on the fermentation lees until bottling.

Pairs with salads, seafood, chicken and other light dishes. The perfect wine for every occasion. 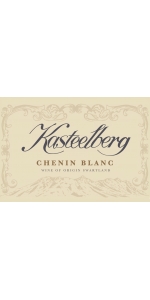 The Kasteelberg range of wines celebrates the discovery of the Riebeek Valley and the Kasteelberg mountains in 1661. Kasteelberg stands sentinel over the fertile valley below. From the slopes of the mountains, hand-selected grapes are expertly crafted with care to produce rare and expressive wines.

Limited release, single-vineyard Chenin Blanc from hand-selected grapes from the foothills of the majestic Kasteelberg Mountain, Kasteelberg Chenin Blanc embodies excellent craftsmanship that transforms the harsh Swartland terroir into the pinnacle of our winemakers’ art.

Together with the age-old tradition of Dry Land viticulture, it resulted in an elegant, aromatic and richly textured wine, with characteristics typical to Chenin Blanc grown under these conditions. Citrus, lemon zest, ripe apple and tropical flavors are only some of the flavors that charm the nose. The palate follows through with flavors of melon, a touch of spice and well-integrated wood for exceptional balance and a luxurious, lingering finish.

Once harvested, the grapes are hand-sorted, de-stemmed & crushed into temperature-controlled gravitational drainers. Only the free-run juice is chilled and settled overnight. The juice is then racked off into new, 300 L, oak barrels (50% French oak, 50% Hungarian oak) and wild yeast fermented in the barrels. Fermentation is temperature controlled and lasted around 22 days. The wine is then matured in the oak barrel on the gross lees for 12 months before being racked off, filtered and bottled. After bottling the wine is further bottle-matured for at least 6 months before release.

"This old-vine Chenin is made with fruit from a 1982 vineyard on the lower slopes of the Kasteelberg. Rich, leesy and slightly dominated by its 50% new wood, but this has the concentration and focus to age well in bottle. Honeyed, spicy intensity is complemented by racy, chiselled acidity. 2021-25" 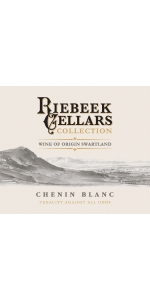 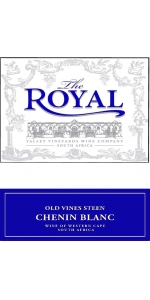 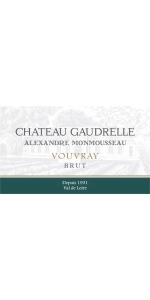 Produced from 100% Chenin Blanc planted on clay and flint stones based soils.
Vinification: aged in stainless steel tanks with temperature controlled fermentation. Aged on the lees for 4 months.
Kieselguhr filtration.
This sparking wine is fresh and fruity. Rich and easy to drink, which makes it a wonderful aperitif. For the aficionados this is an excellent food friendly wine. Its quality makes it a great alternative to Champagne.

"The two sparkling wines should not be missed. They’re both terrific examples of how good sparkling Vouvray can be. Both are 100% Chenin Blanc cuvees, with the non-vintage Chateau Gaudrelle Vouvray Brut showing lots of effervescence and plenty of flowery brioche, buttered citrus, melon and dried apricot notes. It is crisp, fresh, and ideal for drinking over the next several years."
-Wine Advocate 90 pts


"Just off-dry, this almond- and apple-flavored wine achieves a fine balance of crispness and richness. There is just a touch of honey, intertwined with delicious citrusy acidity."
- Wine Enthusiast , 90 pts

Hand harvested, the fruit was whole-bunch pressed at the lowest possible pressure, with only the finest free-run juice kept and settled over-night.

Chevallerie Filia Chenin Blanc Brut Nature is delicious on its own as an aperitif, but also delicious with seafood, such as scallops, seared sea bass or walleye pike.

Huis Van Chevallerie is responsible for producing some of the Best Sparkling Wines from the Swartland. Their Sparkling Chenin Blanc Brut Nature is called Filia.

Origin of the winery's name:
It’s the surname we were allocated with and due to the fact that Domains is referred to as Estate and needs special registration, we decided on Huis (afrikaans word for Domaine) van (afrikaans for the German aristocratic titel von )van Chevallerie.

First generation German born here on the Farm where we farm the grapes, my father Juergen bought the little 110ha/271 acre farm in 1956. My grandmother even farmed here with him for 10 years before my father got married to my mom in 1970, my sister and I were born here and grew up on the farm.

Huis Van Chevallerie Vineyards:
Nuwedam Farm, is situated in the Paardeberg, just off the R45 outside Malmesbury, and is the Chevallerie owned corner of some unique Swartland terroir – purchased by our father, Juergen von La Chevallerie in 1956.


Old Chenin Blanc bush vines, yielding the clusters of fruit for my Kap Klassiek were planted by him in 1976. At an altitude of 330 m the vines are planted on a north-northeastern facing slope, which means that they have no respite from the merciless summer sun which bakes the Swartland during the summer. These old vines rely here solely on the winter rains and the minimal stores of subterranean water that lies deep beneath the surface.


However, the elevation, the clay content of the soils, the frequent summer showers and an almost clockwork breeze which tumbles down the Paardeberg during the summer months significantly cools the vines creating the ideal micro-climate for the fruit to ripen optimally. Vineyards are all dry-land farmed and we apply environmentally friendly farming to ensure continued health of these old bush vines and the surrounding environment – as healthy soils, provide healthy vines.
Production from these old vines is extremely low; they only produce as much fruit as they are “comfortable with” and for the past few years, that has meant a meager yield of 1.2 tons/hectare (9hâ„“/ha). However, the fruit these vines produce possess an exceptional richness, complexity and depth of flavour – even though the fruit is harvested at relatively low sugar levels, the inherent Chenin richness comes to the fore.

The wine is produced from vineyards planted on a mineral and fresh terroir - the chalky plateau of Carnac - which produces unique wines.
The nose shows notes of fresh black fruits (blackberries) with candied fruits and spices. The texture is dense and velvety and the wine is crisp and tense all the way to the finish.

This wine will pair very well with beef tartare, meat in sauce, curries and grilled meat.

"Matthieu Molinié’s family has roots in the village of Carnac-Rouffiac that stretch back to the 14th century. In the present day, he farms 69 acres of vines in Cahors, selecting this malbec from parcels grown in clay and limestone soils. The wine fills out its massive tannic frame with dark-purple fruit flavors, girded by a mineral twang and some herbal notes. Open it when you put the pork belly in the oven and pour it once the pork comes out for a luxurious Sunday roast."